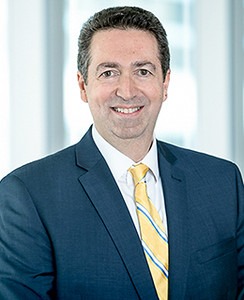 Aris Haigian is a partner in the firm’s Corporate and Securities practice group and is engaged in representing and advising clients in all aspects of corporate, securities and commercial law.  He has substantial experience in mergers and acquisitions, public and private offerings of debt and equity securities (including initial public offerings and secondary placements of securities), representing both issuers and underwriters, general corporate representation, including the negotiation of executive employment, shareholder and partnership agreements, joint ventures and strategic alliances, bank financings and various other commercial matters.

Mr. Haigian has represented trustees and borrowers in several complex debt offerings under the Trust Indenture Act, as well as borrowers and lenders in major asset-based, term and revolving credit facilities, both secured and unsecured.  Mr. Haigian’s practice also encompasses advising Boards of Directors and Special Committees of Boards with respect to their fiduciary and other duties in connection with merger and acquisition transactions and corporate governance issues.

While in law school, Mr. Haigian served as Articles Editor of the Fordham International Law Journal, and is the author of the Note, “The Separate Entity Fiction Exposed: Disregarding Self-Serving Recitals of Juridical Autonomy in Nationalization Cases”, which analyzed a case involving complex banking and corporate issues in an international business transaction that was ultimately decided by the United States Supreme Court.  Mr. Haigian’s publication was cited by the United States Court of Appeals for the District of Columbia Circuit in support of its holding in a case involving similar issues.   Mr. Haigian is also the author of an article discussing various considerations under applicable Federal and State securities and related laws in connection with the adoption of a stock repurchase program by public companies entitled “Roadmap for Implementing a Stock Repurchase Program”, which was published in the New York Law Journal.

A.  Mergers and Acquisitions:

B.  Capital Markets and Bank Financings: